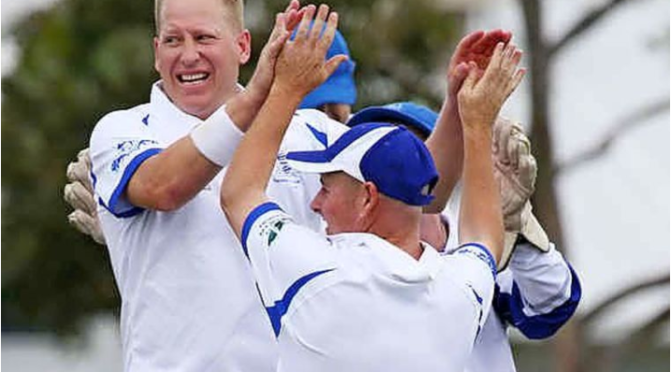 A Roarsome weekend coming up for Sunbury Cricket Club. In its first season in the VTCA Sunbury Roar 1st and 2nd XI’s have made the Division 5 Grand Finals. U17’s roar into their grand final with a big win over rivals Gisborne Dragons.

Check MyCricket on the link below for match details.

With play abandoned on day one in the 1st XI clash with Melton South Royals the semi final was played as a 40 over one day fixture. The Royals managed 75 in their innings in difficult conditions early. Highlight was Jason McGowan with 4/16. Losing quick wickets at the start left the Roar at one stage 3/8 however Regan Connell and young gun Jordan Tentonello steadied the ship to bring the total within striking distance. Stephen Treweek entertained the crowd by finishing off the run chase with a massive 6. The Roar passing the total 4 wickets down in the 22nd over.

Sunbury Roar 2nd XI
The Roar 2nd XI also faced off against Melton South Royals  in a semi final. The Royals batted first in good conditions and managed 138. Again Brad Hunter was the standout with a return of 5/20.  At the end of the 1st days play openers Paul Webber and Jake Egan saw the 16 overs off while managing 32 runs.
On day two, the Roar passed the total losing only 3 wickets. Paul went on to remain undefeated on 72 runs with assistance from the “Chief” Murphy Boyd (32 no).
Sunbury Roar U17’s
Sunbury Roar U17’s have also qualified for the Grand Final with a solid performance against Gisborne in the semi final. Batting first the Dragons managed 111 runs on Clarke Oval. Blake Watson and Connor Reeves sharing the bowling honours with three wickets each. The Roar passed this total comfortably with Josh Goater starring with the bat finishing with an impressive 84 not out. The Roar now meet Bacchus Marsh at Clarke Oval in the Grand Final.
Sunbury Roar GDCA semi finals
Also this weekend Sunbury Roar 3rd XI face Eynesbury in the semi final at Mt. Carberry Reserve and 4th’s play off for a grand final berth vs. Rupertswood at Salesian College Oval 1.

We are Sunbury, hear the mighty Roar !